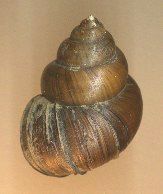 Chinese mystery snails, native to parts of Southeast Asia, were brought to this country as a food source for Asian markets. It is believed that imported snails were intentionally released in some ares to create a locally-harvestable supply. Since their introduction, Chinese mystery snails have spread to many parts of the United States, and can now be found in a number of Maine lakes and ponds.

Chinese mystery snails are distinctively large; at the size of a walnut or golf ball, the are half-again as large as Maine’s largest native freshwater snail. Though they spend a good portion of their lives under the water surface, half buried in the bottom sediments, Chinese mystery snails may also be encountered with their trap doors sealed up tight, floating along at the water’s surface. When these large snails die, they often wash up on shore, where their dark, olive-colored shells can be easily seen and (unpleasantly) smelled. Chinese mystery snails prefer the quiet water of lakes, ponds, roadside ditches and slower portions of streams.

Once in a body of water, the Chinese mystery snail may be transported, as adults or tiny juveniles, via bait buckets and water holding areas on boats. Like other snail species, this species may serve as a vector for various parasites and diseases. Chinese mystery snails occur in a number of Maine waterbodies, but the full distribution of this snail in Maine is unknown. Lake Stewards of Maine (LSM) currently manages a statewide database on reported sightings of C. chinensis malleatus. You can assist the effort to get a better handle on this invasive organism by reporting any sightings to LSM at 207-783-7733 or stewards@lakestewardsme.org.

LSM is a non-profit 501(c)(3) organization committed to the collection of information pertaining to lake water quality. For 40 years, trained volunteers throughout Maine have donated their time so that we may all learn more about one of Maine’s most beautiful and important resources — our lakes.