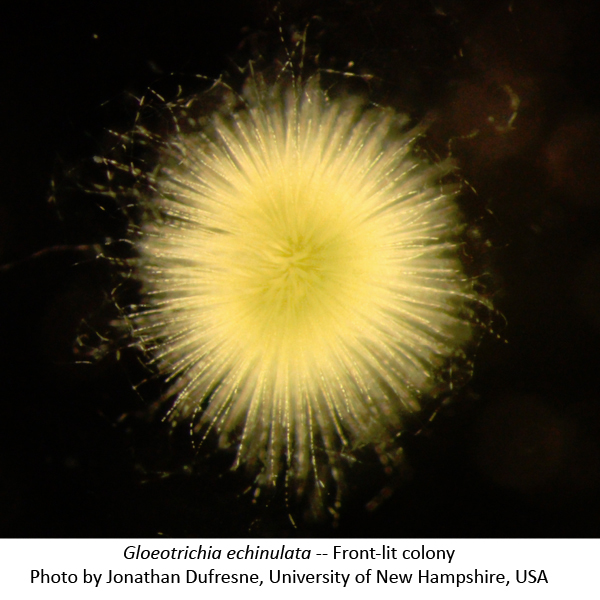 Gloeotrichia (pronounced “glee-oh-tricky-ah”) echinulata is a colonial bluegreen algae that forms tiny spheres, which can be seen without magnification in lake water. “Gloeo” has been known to exist in Maine lakes for many years, but it has typically been observed in late summer, in relatively low densities.  However, during the past decade, Gloeo appears to have been on the increase in lakes throughout much of New England. Gloeo blooms have occurred earlier in the summer, and in higher densities. Research on the life cycle of this alga has suggested that Gloeo may play a role in declining water quality of otherwise clear, low nutrient lakes. Lake Stewards of Maine (LSM) monitors are working with researchers from Bates College and other institutions that are studying Gloeo. Volunteer lake monitors are now being trained to identify and quantify colonies when they take Secchi disk readings, using a simple density scale developed collaboratively by Maine DEP, LSM and Bates College. The photo shows a highly magnified single Gloeo colony. Observed in the water, Gloeo colonies appear to be the size of the head of a small pin.

Gloeotrichia monitoring protocols and training are available through the LSM. Please contact us at stewards@lakestewardsme.org for more information.

LSM is a non-profit 501(c)(3) organization committed to the collection of information pertaining to lake water quality. For 40 years, trained volunteers throughout Maine have donated their time so that we may all learn more about one of Maine’s most beautiful and important resources — our lakes.